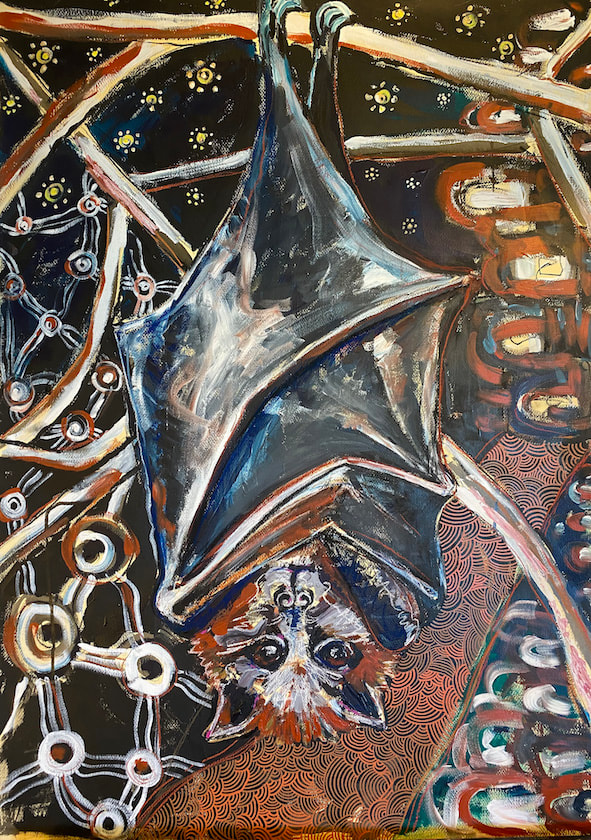 The silencing of Aboriginal languages is the legacy of colonialism. From an Aboriginal perspective, Country and Language are inseparable; they were formed together. By recognising the language of the Country, therefore, one also recognises the speakers of the language as belonging to the land. Hidden - but still heard, the  language of my people is scarce and fragile.

A longing for Language is central to these works. It is woven into the works - in letter, in sound, in symbol, in line and pattern. The figurative elements of the bats are interwoven with Aboriginal symbols and patterns. The woven branches on which the bats hang represent the complex and fragile connections between family, Culture, Country and Language. These things are not compartmentalised and disconnected from everyday experience, rather they permeate the fabric of existence, shaping ways of seeing, doing and understanding.

Large numbers of bats are increasingly taking up residence in urban areas. The language used to talk about the bats resembles Colonial language used to justify the forced removal of Aboriginal people. In Figtree, where I live on Dharawal Country,  a huge colony of grey-headed flying foxes has taken up roost in a patch of bush that is inconveniently nestled between houses and businesses. The tens of thousands of bats have prompted residents and business owners to complain about the bats - the noise, smell, and general unsightliness of the bats are often quoted as good reasons to “get rid of them”. Yet despite the hostility and the encroachment of development on their community, the bats persist. At sunset, they fly. Bats everywhere; the sky blackened with families of screeching things - all furry heads and leathery wings. They are a community. We live beside them everyday. They were here long before humans arrived.

​This series is about strength, resilience and persistence. Using the metaphor of the bats it celebrates the continuing Culture and Language of my people.